Okay, I am going to be the first to admit that I actually have no idea who the girls of Pristin are. Like, I am not going to just pretend that I know who all of them are as I do get confused. I am a huge IOI fan so of course Kulkyung and Nayoung are totally known to me and I love them. I have endlessly watched their music videos and am in love with Black Widow because that song has such a catchy tune with amazing choreography. I do support them as a group but I will admit that at times, I do get confused on who is who. I am learning though and yes, I am not only focusing on Nayoung and Kulkyung anymore! The group itself is starting to climb up my bias list and I do have to say that Pledis Entertainment is killing it with the choice of concepts for the girls.

We all know I love my IOI girls and wish they could stay together forever but it was never meant to be. However, I do support them all individually and always try to keep up with what my girls are doing. Pristin is another extension of IOI so I do try and support as much as I can but it is hard. I love all the groups that they are now in like Pristin, Weki Meki, Gugudan, DIA and Cosmic Girls and will forever support them.

This leads me on to the next Unit that the girls are involved in which is PRISTIN V! I am always excited to hear new music from the girls or see them involved in anything from dramas to Variety shows to even being a guest at some random event so to know that Nayoung and Kulkyung are going to be in a Unit is amazing news! So let us proceed to the teaser images!

So let us start off with Kyulkung who looks striking in this close up photo of her face. The red lipstick is such a contrast with the blue background. I do feel like it is so dreamy and captivating that her eyes, which is also the same colour as the backdrop, just pulls you in. Her make up looks impeccably well done and the image just draws you to her and doesn’t let you go. The picture doesn’t truly allow you to know what the actual concept of the debut single is and I guess this picture just adds to the mystery as we don’t really see much in terms of what she is wearing or where she is. All we see is her, not that anyone is truly going to complain about that, and other than the fact that her eyes are the same blue colour as the background and the red lips scream ‘BOLD’, nothing really gives away what we should be expecting with this Unit debut.

Okay, the first thing I noticed in this photo was Nayoung of course, then it was the bright red colour of whatever she was sitting/lying on and then finally my eyes were drawn towhead was in her hand. A gun! First of all, she looks stunning and let’s be honest, she slays the girl crush concept and that does not seem to be changing any time soon. The dress compliments her well and like Kyulkung, her make up is beautifully done. Again, we see red but unlike the previous image where it was solely on Kyulkung’s lips, this is used in a much more bolder way. We do see more of Nayoung than Kyulkyng and I guess, we can try an guess more of the concept that they were going after. The gun does throw me off a bit though. What was it’s purpose? Were they going for a Jame’s Bond, Spy concept? Were they vampire slayers? I guess that would explain the red but I most would kill them using a stake rather than a gun. All I know is, Nayoung looks amazing in her teaser photo and if any guy has broken her heart, they better watch out.

Now we meet Roa! Okay, so I got to know her when she was in Produce 101 along with Nayoung and Kulkyung but she got eliminated from the show around episode 8 or 9? I also knew her as Minkyung so I got really confused when they debuted because I thought she might have got dropped from their group Pledis Girls which also lead on to Pristin. In this photo, the first thing I did notice were her eyes! Were the members realising that they were pulling you in with their eyes? The blue also has a connection with Kulkyung’s photo however, we do see more of Roa just Nayoung’s teaser image. She is decked out in denim and even has a belt on with the word ‘Jeans’ running across it like we need a reminder that she is wearing double denim. Also, she seems to be sitting on white lace which I do not know if it is attached to her like a skirt or just so happens to be wear she’s sitting. Has anyone else also noticed the fact that she is sitting on a pile of, wait for it, DENIM? Like she’s on a whole of jeans! Wow, I guess she really does love the fabric… She does look beautiful with the blue hair, I must admit and this photo makes me want to know more! 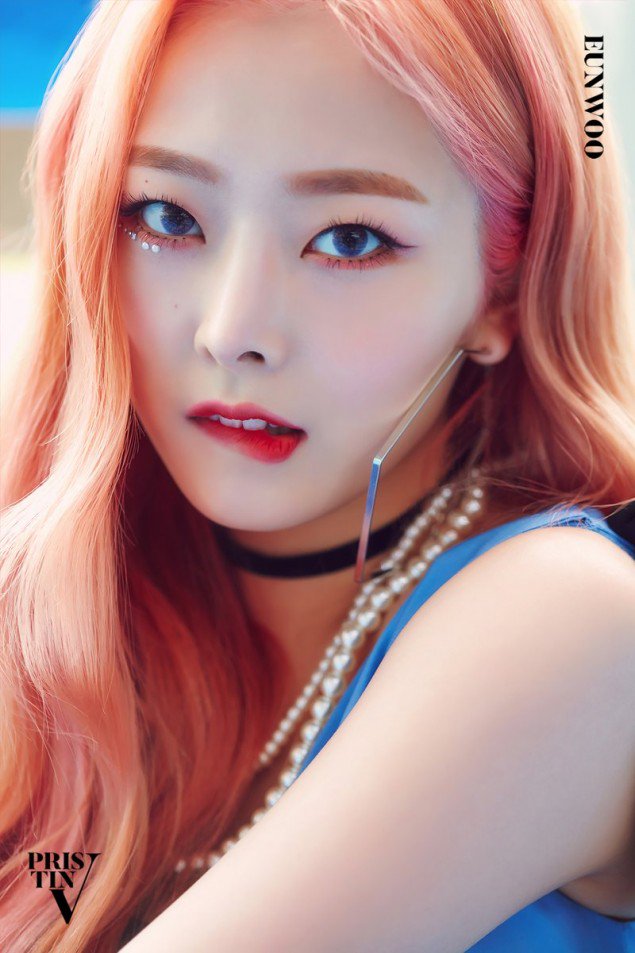 Can we first just stop for a second and appreciate the beauty of Eunwoo? This has to be one of my favourite images of her! Like not only does she match the Pink, slightly orange yet has a touch of red hair, the make up also draws you completely towards her eyes, which are also blue like Kulkyungs. What I do notice now is there seems to be a lot of blue and red accompanied by Black and white. They seem to be the focus colour here which I guess ties the images together enough yet lets them be completely individual and unique. I was so proud of Eunwoo during Produce 101 and loved her voice! Unfortunately she wasn’t able to be one of the last 11 girls who made up IOI but she did make it to the final so I guess I am happy I did get to see her longer than most of the other Pristin members? I love her voice and I am happy she gets more opportunities to show off her talent. There’s nothing more that I really have to say about her teaser photo other than the fact that I absolutely love it and that she looks AMAZING!

Last but not least we have Rena. Formally known as Yebin she was also in Produce 101 but didn’t quite last to the very end. Okay, so she stood out to me in their very first performance with her rapping but she slowly started to disappear and I guess that is due to the editing or maybe she didn’t make herself stand out? I remember she had a short haircut and had spit like crazy when they performed Bang! by Afterschool who are also Pledis entertainment artist. I do know she has talent and I hope that we get to see more from her in this Unit. Once again we see the colour blue come in to play here with the red on her lips. I guess the blue was a way to tie most of the pictures together, other than Nayoung’s teaser image, and the red was also a connection between all five in a a more subtle way. Her eyes just captures your attention as soon as you see the photo and I do have to say that she suits the blonde hair! It gives her a certain edge that she doesn’t quite have with black hair. I am not saying that she isn’t beautiful with darker hair, I am just saying that the blonde just makes her a little edgier and brings out a more sassy side to her. All in all I do think this picture of her is definitely beautiful but also gives us that ‘Do not mess with me vide’ which of course only makes us more curious.

These images are gorgeous! All five girls look amazing and I can not wait for when the video comes out and we finally get to see the final product! Can you also imagine how amazing the live performances will be and how the choreography will look? I am excited for this Sub-unit and it’s debut!

Watch out for the 28th of this month guys! Put it in your calendars cause it’s only 2 days away!

“I’m stressed” - @the.real.divya Exams are right around the corner ... please don’t do what we did and go watch a movie 😂
Honorary Fijian for the week 🇫🇯 #HappyFijianLanguageWeek #KaiFiji
A bit of a late post but whatever! It was the Queen’s Birthday yesterday so... the team at @laclochecafe_ spoiled my mum 😂😂😂 thanks @teacakesandpinnies , @superkatman & @jimmycutkorn 🙌🏼 Side note: it was NOT her birthday 😂
The last time the Trim Team will all be in the same place! Safe travels my Frenchies 🇫🇷 @paulinepllgrn & @travel_the_wine 💗 sorry @zacmcleod_ & @william_philipson y’all are stuck with me 😂 #TrimTeam
My grandma and twin 💗 wish I was there to celebrate with all of you but will be there soon! Happy 21st birthday Twinny! Much love xx
ITS YOUR BIRTHDAY! Happy 21st Birthday sis! Can’t be there today with you but for sure will be up soon to celebrate 🎊 thankful for what you do for the fam especially for Grandpa Vesi and your sisters! No need for a long novel cause you already know but love you to the heavens and back sis! Happy 21st Birthday @lalafale 🎉 #birthday
I’m ready 💗 Photo Credit: @leeah_faalelei
IT’S A BOOOOOOOOY👶🏾 Congratulations @ohhmyygolly & @_niinawhtys 💗💗💗 I’ll see y’all soon 🥳🎊 #BabyFelila #FOE
The Frenchies! Last day with @paulinepllgrn Oh plus Will, Tara and I 😂
Happy Birthday Maddy 💗 @jimmycutkorn
Regional Dinner Dessert 💗 @teacakesandpinnies @laclochecafe_ #foodinwellington
Food with my Frenchie 💗 two of my favourite things x @travel_the_wine @mamabrown_nz #foodinwellington